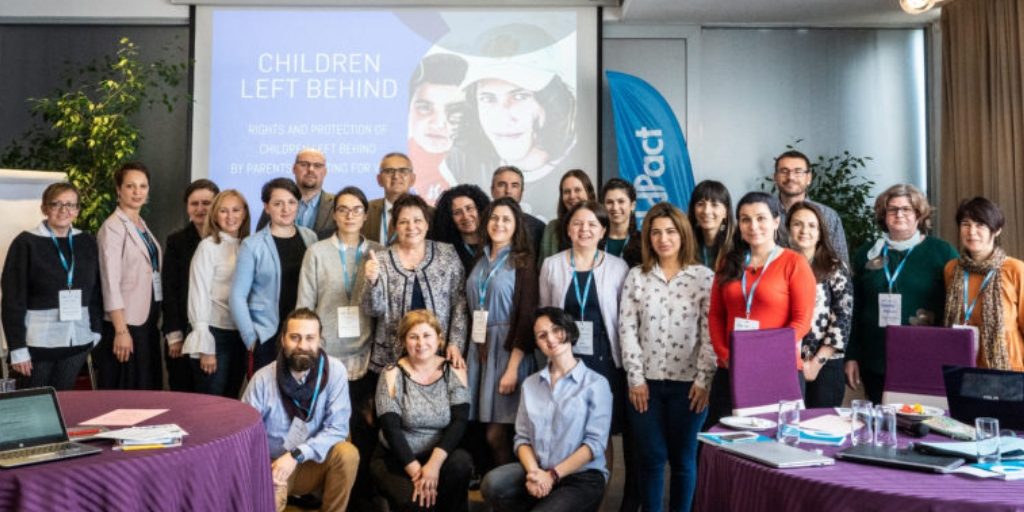 On 17-18 April, over 40 experts and practitioners from 15 countries in Central and Eastern Europe, the Western Balkans and South Caucasus gathered in Bucharest to discuss the situation of children left behind due to the migration of parents for labour reasons.

APSCF was represented at the conference by Mariana Ianachevici, executive director of Ave Children Association and APSCF board member, and Carolina Buzdugan, secretary general APSCF.

Cristina Rigman, ChildPact Secretary General, highlighted the fact that countries like Romania start to be, are at the same time, host countries for migrants coming to work and should therefore set an example. Mrs Rigman declared: “We see more and more workers from Asian countries coming to Romania for work reasons. It is our chance to showcase a model of responsibility of the host countries towards the working migrants they host and towards their children left behind in the country of origin.”

Carolina Buzdugan, APSCF secretary general, highlighted the fact that in Moldova, collecting data about children alone at home differs from one institution to another, therefore the situation of these children is not always clear. “There are many challenges for the psycho-pedagogical and social assistance. Mechanisms of cross-sectoral cooperation exist, but they do not work locally and this limits the interventions of the professionals and the access of children to appropriate services”, Mrs Buzdugan highlighted.

Kirsten Theuns from Terre des Hommes Eastern Europe Delegation talked about some of the findings from the countries where the organization has operations at the community level such as Ukraine, Moldova and Romania, where children left behind were included in the interventions. Mrs Theuns called for building blocks for a programme intervention on children left behind and suggested four areas of intervention: 1) Framework improvement: Government policy and legal frameworks ensure access to quality services across the continuum of care; 2) Children & Family Empowerment: children left behind and their families are socio-emotional competent and well informed about relevant issues; 3) Capacity building & Networking; 4) Non-formal and formal actors work together to address new threats and capture new opportunities as well as capacity of key local actors in the child protection system is built.

Other speakers were: Violeta Bîrlă, a young film director from Romania living in Italy, Sandra Pralog, State Adviser at the President Administration (Department for the Relation with Romanians from Abroad), Corina Marinescu from the National Authority for the Protection of the Rights of the Child and Adoption in Romania, Alexandru Gulei from Alternative Sociale Romania, Eduard Petrescu from Unicef Romania, Daniela Bocsa from the Federation of Nongovernmental Organizations for Children in Romania (FONPC), Ina Radkova from National Network for Children Bulgaria, Silvia Dumitrache from Association of Romanian Women in Italy, Anna Arganashvili from the Coalition for Children and Youth Georgia, Tamara Barbakadze from Child Protection Network Armenia / World Vision Armenia, Voica Tomus from UNICEF Romania.

In the closing session of the event, the joint statement of the conference was discussed and endorsed by the organisations and participants who once again acknowledged the transnational dimension phenomenon and agreed that in this context of transnational welfare networks, all parties involved have a duty to ensure that the vulnerabilities and risks to children are reduced to a minimum. The joint statement of the conference is available here.